The opening night of The House of Eternal Return was a triumph for artists everywhere, and possibly the best night of my life. This permanent art installation—imagined into being by the art complex Meow Wolf—is now open to the public in Santa Fe. Thanks to generous backing of George R.R. Martin, who contributed over 2.7 million dollars to the project, the vision of these deserts artists has come alive in what they describe as a “combination of jungle gym, haunted house, children’s museum, and immersive art exhibit.”

Over 135 artists and a legion of volunteers worked to transform a deserted 20,000 square foot bowling alley into a two-story fantasy world. It looks like a set designer’s wildest dreams, and creates a captivating multi-sensory experience as you wander through a family’s home and the dimensions that their space-time tears have opened.

Imagine walking into a bowling alley in the middle of urban Santa Fe and finding yourself transported onto the grassy lawn of a complete Victorian home. The mailbox is full of letters and plot points, the front door is open. You can wander around an almost ordinary house, or you can move through it unhindered by reality. The fireplace radiates a green light, crawl into it and you will find a glowing subterranean cave full of musical dragon bones, that form a giant, skeletal xylophone.

In the kitchen, you could page through a woman’s recipe book, critique their cereal choices, or open the fridge and head to an inter-dimensional portal station.

(As you can tell from the butter drawer behind me, I’m currently in the refrigerator)

Upstairs, the bathroom is full of fixtures with taps that pour red or blue light in place of water. The bedrooms have their own secret passageways that weave into the great beyond, or otherwise dead-end in odd sanctuaries. The office’s computer is free to explore, as are its file cabinets. More documents than you could possibly go through tie the nebulous plot events to strange inventions and alarming Illuminati conspiracies.

Outside, things become even stranger, in a forest built of LED light and 3D-printed foliage, much of it musical to the touch.

Pieces of people’s lives—some overwhelmingly strange, others unbearably ordinary—are scattered everywhere. There is no coherent logic to this fantasy. Symbols and shapes, all with indefinable meanings, are impossible thoughts turned to indecipherable code. Whatever rules you think it has set for itself will be broken within minutes of exploration and shattered beyond all recognition. I walked in and immediately knew that in a worst case scenario this would only be the best night of my life. Repetition, paten—everything is thrown to the wind. It gives you nothing but the wisp of a narrative, and even that falls like sand through your fingers. Anything that glows will make a noise when pounded. Some rooms give the impression that you are intruding on a private, clandestine, madness…others feel as though they belong to our common insanity.

Nothing is the same in one light as another. Florescent flowers pulse like an intense but peaceful drug trip, and visitors buzz with numerous discussions of previous psychedelic trips. Everything looks like a stop-motion scene waiting to come to life under the rainbow cover of a willow tree’s paper leaves. Fantasies of our generation blur into the memories of another. Black light adds an otherworldly illumination to everything that is already in the light of colored LEDs

Like an open world video game, there was no instruction or direction. Individuals defined their purpose and the parameters of what they wanted to discover in this environment. Some tried to decipher the plot, others adopted a dogged determination to find every bizarre room and hidden nook. Still others could do nothing but wander in awe at this masterpiece of collective imagination. 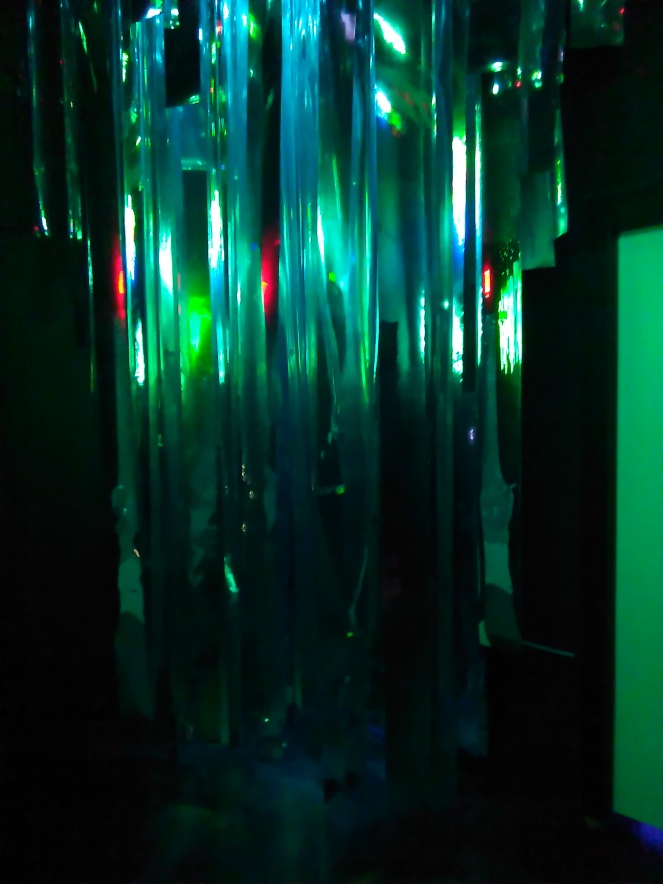 You never realize how big a bowling alley is until you fill it to the brim with a vibrant new world.

Rooms exist without purpose. A cartoonish black and white kitchen feels pulled straight out of a demented Betty Boop cartoon. An arcade is full of free vintage games, but the few people playing them speaks to alluring draw of everything else in the exhibit. A post-modern chapel makes as little sense as a gallery of mechanical hand sculptures or a room painted from ceiling to floor with jumbled manga-style images. In the yard, a woven dear is bleeding yarn and knitted guts—only it’s skeletal head is real.

As if all this was not enough, they have targeted a familiar segment of the artistic market by constructing a concert venue within this mad world. It is a courtyard, tucked between neon-lit storefronts and houses. The stage looks set for a play in a small-town Las Vegas. Amanda Palmer, playing that night to celebrate opening, announced she felt like she was “in a picture book’s idea of a rock concert.” Some fans hung out of second story windows, peering from houses and towers to see her performance while others of congregated in front of the stage. The music reverberated off of every surface in the painted play town, and the floor was painted like an optical illusion—it has has no effect but the same mild disorientation caused everywhere in the exhibit.

I hopped onto a ledge on a telephone pole and watched the concert from there. No one stopped me. LED light strings ran from the post like telephone wires. Amanda Palmer and Jason Webley spent the evening playing songs and telling stories, muddling medias themselves.

This is the House of Eternal Return, this is the gamechanger in the game you didn’t know you were a player in.

This victory for American art should not go unnoticed or underestimated. Similar to England’s Punch Drunk production company, Meow Wolf is almost too unique to merit comparison. In the coming weeks they will pioneer affordable youth arts programs, showcase emerging artists, and launch Make Santa Fe: a creative workspace open to all with “3D Printers, CNC Routers, Laser Cutters, and other high-end equipment for public use.”

I will eternally return to Santa Fe, if only for the experience of this brilliant, experimental art project. The House of Eternal Return is the epitome of what art and technology is currently capable of, and a beautiful testament of mankind’s ability to not only dream, but craft those dreams into reality.

One thought on “The House I Will Eternally Return To”