As release day hovers like a fog over this month (I think the official release was yesterday, although readers started getting copies of the book like three weeks ago?) I thought I’d dust off this old blog and do a few posts about this final chapter in the Neverland Wars saga. I use the term saga with purpose – I feel, after these past three years a little like a grizzled old Viking, returning home from a strange and unimaginable expedition. I just got my author copies last weekend, and the experience was all full of catharsis and melancholy.

I’m glad that I got so much say and influence over the art design. The trilogy visually took shape in my mind as soon as we had the first book’s cover. 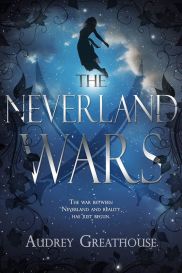 The Neverland Wars with its bright and midnight blues signals all kinds of mystery, the dark of night and what strangeness can unfold in it. I love that Gwen is flying, but more like falling, on the cover, silhouetted by starlight. I wasn’t thrilled about the criss-crossed swords (since Neverland’s pirates were relegated to backstory in the first book) but it did serve as a nice visual image to substantiate the title and represent the clash of childhood and adulthood Gwen faced. Like the ivy, I did not initially see the potential in the design. 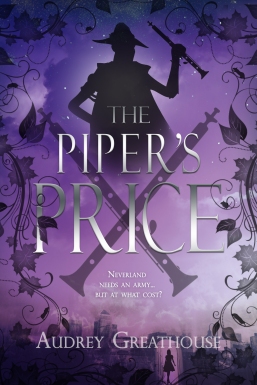 By the time we started compiling the elements for The Piper’s Price cover, I had fallen in love with both the swords and the ivy, and knew just how I wanted to transform them for book two. The swords became pipes, and the ivy became infested with subtle silhouettes of rats. The city skyline below created a tiny environment for Gwen to exist in, while the sky was dominated by the shadow of the Pied Piper. I immediately knew I wanted this book purple – and I suspect that this impulse came from some implied alteration (‘The Piper’s Price is purple’ amuses me.) Still, it fit with what I wanted the book to be. The twilight between day and night – or night and day – hints at the tug between reality and Neverland, which Gwen feels more potentially while inhabiting reality on Neverland business.

The Grown-Ups’ Crusade is red for several reasons. I loved the transition from one side of the color wheel to the other, the cold blue of Gwen’s indecision turning into a burning red urgency by the end of the series. The old saying “red sky at night, sailor’s delight; red sky at morning, sailor’s warning” played into the image as well. The books have gone from night to twilight to dawn, and this red dawn brings with it all the warning it can muster… not just for pirates lurking in the bottom of the cover, but for lost children, too. Peter brandishes his sword with youthful vigor, flying to the top of the cover, finally represented in the cover art of this series. 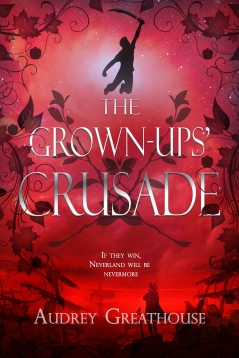 And what of the ivy? The observant reader will notice a strange apple-like fruit on the red cover, tucked into the ivy and growing with no small purpose. I won’t spoil anything for you, but keep your eye on the fruit, and mind the branches that cut and cross over this cover, as well as over every chapter number. If The Neverland Wars is a retelling and continuation of the Peter Pan story… The Grown-Ups’ Crusade is a retelling and continuation of its own.