They never tell you how hard it is to look back on an event like a book, because they never mention how many different starts it has. If I’m going to start getting nostalgic, where do I even start? The late November night when seventeen-year-old Audrey started sketching out the bones of a girl named Gwen, a boy named Jay, a mermaid named Lasiandra, and the immortal, infamous Peter Pan, with little more than the phrase Neverland Wars echoing in her head?

Or should I start just two years later, when I began penning the first book for NaNoWriMo while couch-surfing around California as a college sophomore? Certainly The Neverland Wars didn’t really begin before I fell in love with Zaq and followed him down the west coast because (among other things) he was the only boy I’d ever met who venerated Peter Pan as much as I did. 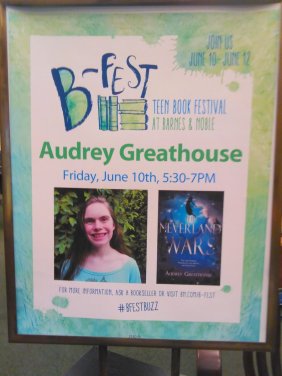 I could say the book started as that secret project, secret present, for Zaq, in that strange autumn before we started dating. Or I could spin it more independently and begin my story at the San Francisco Writer’s Conference where I learned how to edit and pitch the book, turning it into a (slightly) less meandery story.

But I think I’ll cut to the chase, and bound my nostalgia to the day it was accepted for publication. At that point in time I was living in Portland with a house full of crazy Craigslist roommates, but happened to be in L.A. to see Kyle Eschen with Zaq the morning that my offer of publication arrived in my email inbox.

I had written the book years ago at that point, but had never moved onto the sequels. As soon as I had my first book deal, all of the energy of the first reinvigorated me and taught me a passionate desire to make it even better than the first. In many ways, I think it was. The Piper’s Price had three more years of growth and craft development by the time I sat down to write it in the frenzy of a post-college NaNoWriMo. Even then, I think, I was starting to see that the end of the story would be different than those old notes from high school depicted.

The Grown-Ups’ Crusade was meant to be a NaNoWriMo project, too, but the year after The Piper’s Price I found myself drowning in other emotions, other events, which manifested into a very different book. (I doubt Razor City will ever see the light of day, but it was the diversion I needed at the time.)

Instead, I embarked on The Grown-Ups’ Crusade on the first of the new year, and the early part of 2017 was dominated by my desire to get the final chapter of this series finished. I struggled with the writing of it, and the further I went the more the ending seemed to shape-shift away from me and turn into something I had never expected when I first conceived the story.

Publishing a book is a little bit like growing up though, and I did a lot of growing up throughout this journey. I don’t think it would have done the series justice to just tack on the simple ending I dreamed up while still on the other side of adulthood. There’s something bittersweet about the reality to appreciate, to write about, coming of age, it often demands the perspective of having already lost childhood. I don’t think its any coincidence that Peter Pan is regarded as one of the best works of children’s literature and it is by no means designed to be independently read by children.

The original ending was built of the same cliches that populate every young girl’s imagination. The ending the book got, the places that Peter, Gwen, Jay, Lasiandra, Rosemary and all others find by the end of this story better reflect the way in which I’ve seen life unfold in that precious bridging time that both kills and invents us as people.

And now, I feel grown-up all over again and am enjoying it as much as Wendy herself. I’m ready for the next project. It’ll come along soon; I’m as sure of that as I am sure the second star to the right is still burning in the night sky above my window every night.