Friday morning, an old friend of mine was killed in the crosswalk just down the street. Sarah Paulson and I met in the second grade, when I was seven years old and had just moved to a new school. I didn’t have any friends, but I still remember seeing her for the first time, a young blonde girl standing with her father outside of the door of my classroom. She had her back to me, but she was wearing a lovely plaid school dress. I remember when she turned around we saw each other. I didn’t know then how long she would be in my life, or for what wonderful reasons I would never forget her face

This photo was taken during our senior year roadtrip to Ashland, outside of the youth hostel we stayed in while we were in town to see Measure for Measure with what remained of our girl scout troop 1167 after eleven years together. Sarah is on the far right; she was born with distinctive features, and missed some school every year for the surgeries she needed in order to safely grow into the young woman she became. She had a lot of challenges in life, and I know I only glimpsed the tip of the iceberg of the physical, emotional, and social battles she faced. Sarah had the most radiantly cheerful disposition though, and you never would have known anything was hard or challenging about her life if you were going simply by her attitude.

It’s hard to believe that’s she gone. Everyone knew her, and everyone loved her. I don’t know anyone within a three mile radius of my house who isn’t grieving her right now. She was a victim of a hit-and-run driving accident (the driver later turned herself in to the police…) Passing in a crosswalk Friday morning, she was struck and killed on the spot. There are so many flowers on that corner now…it’s hard for me to drive by it just to go to the grocery store.

Sarah was on her way to the bus stop. She couldn’t drive, so she took the bus to get to her college classes. She was three years into college, she was four months into a relationship with her first boyfriend, and her mouth had finally finished growing enough that they could do permanent dental implants and allow her to eat steak and tough meets for the first time. While her physical anomalies were going to continue to provide her with challenges, Sarah had finished growing into a young woman, and everyone was confident in her ability to take care of herself, learn, work, and be the wonderful person she had grown up to be. It doesn’t seem right that someone who fought so hard all along should have life taken away in such a random, chance occurrence.

We were in girl scouts together from second grade to senior year, we used to eat lunch together in junior high, and we were once in a production of A Midsummer Night’s Dream together. I played Puck; Sarah played Cobweb. I keep coming back to the fairy lullaby that she sang, dancing around her Queen Titania. I watched her so carefully, waiting for her to exit right so I could sneak on stage for my scene. She was so nervous that opening night, but she sang, and it was wonderful.

You spotted snakes with double tongue,
Thorny hedgehogs, be not seen;
Newts and blind-worms, do no wrong,
Come not near our fairy queen.
Philomel, with melody
Sing in our sweet lullaby;
Lulla, lulla, lullaby, lulla, lulla, lullaby:
Never harm,
Nor spell nor charm,
Come our lovely lady nigh;
So, good night, with lullaby. 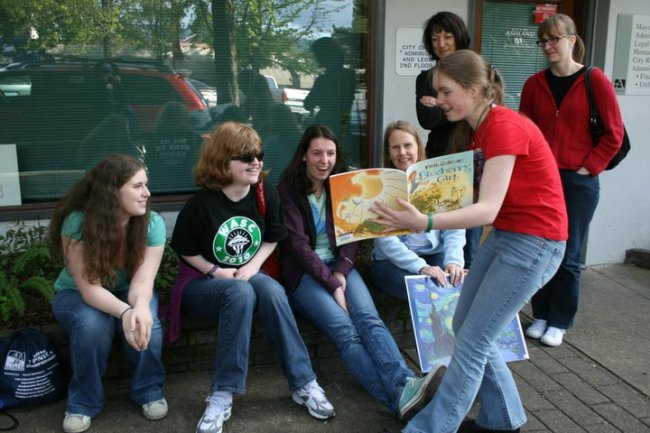